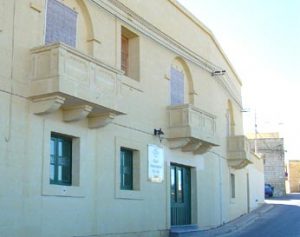 The Gozo Association for the Deaf (G.A.D.) is a non-profitable organization managed by a Committee, which is elected every two years. It was founded on 21st  May 1988 with about 25 members consisting mostly of parents of hearing impaired children and a number of volunteers. Initially the G.A.D. focused on the education of young hearing impaired students to ensure that they would have the opportunity to develop all their potential so as to secure a sustainable future for themselves and be able to live independently.

The G.A.D. has always been instrumental in lobbying with government authorities to provide adequate services for hearing impaired persons. When the University of Malta opened up a course in B.Sc.(Hons) Communication Therapy for the first time ever, in the early nineties, the G.A.D. took the initiative of organizing a meeting for all Gozitan students who had just finished sixth form to encourage them to undertake this course. Fortunately, two students opted for this course. Thus, when these students graduated, they were immediately recruited with the Gozo General Hospital to run the Speech and Language Therapy Clinic.

In addition, the G.A.D. worked hard to have a decent audiology service established within the Gozitan Health Service. As a result, an audiology clinic was eventually set up at the Gozo General Hospital. This was further enhanced by introducing the service of an audiology technician in charge of making ear moulds.

Throughout the years, the G.A.D. has also found a lot of support from both national and international professionals working in the field of deafness. Thanks to them, various projects have been accomplised from which the deaf population of Gozo and, in certain instances that of Malta too, are still reaping the benefits.

The G.A.D. also boasts of having its own Centre, opened on 2nd March 2003. This is thanks to great financial help from the Gozo Curia and support from the Ministry of Gozo. This Centre was crucial for the G.A.D. to expand its activities and give quality service to its members who are continually increasing in number. At present, the Association has 224 members. Members hail from both Gozo and Malta.

At the Centre there is a testing room equipped with various types of measuring instruments to test the hearing of very young children and adults. A hearing aid analyser, recently donated in part by the Fund for Voluntary Organizations Malta Community Chest Fund is another instrument which forms part of the audiological equipment occupying this room. This is used to check the functionality of hearing aids.

The hall of the Centre is equipped with an induction loop system. This helps hearing-aid users to understand speech and listen to audio presentations better whenever social, educational and cultural activities are organized.

The Gozo Association for the Deaf is enrolled with:

The Gozo Association for the Deaf is registered under the Voluntary Organizations Act 2007-Reg. No. VO/0330.