A loop system is an assistive listening device for hearing-impaired persons who benefit from the use of a hearing aid or cochlear implant.

It consists of a loop of wire installed round the perimeter of a designated area. This looping system generates an electromagnetic field picked up by the hearing aid or cochlear implant switched on the “T” position. Hence the sound source is directly transmitted to the hearing-impaired listener clearly and free of other distracting noise in the environment such as background noise and reverberation.

The following are some examples of positive comments of people who experienced listening through the Loop System.

Public places where loop systems can be installed are churches, cinemas and theatres, ticket booths, schools, hospitals, customer windows in offices, airports (for PA announcements), auditoriums, cash counters and also in homes. Places where a loop system is installed should carry this sign: 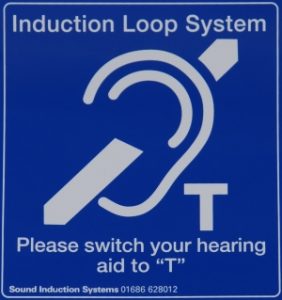